LSP win for Telengana and Seemandhra without Power 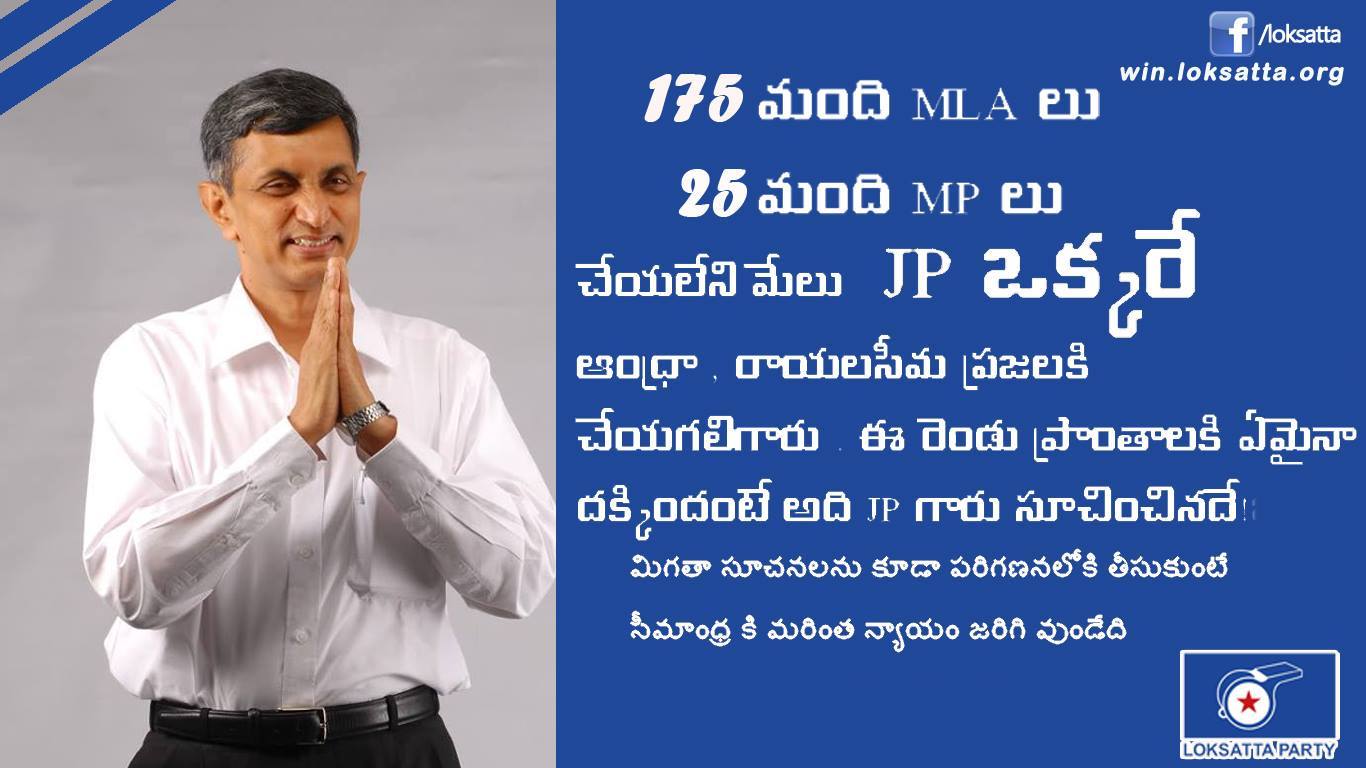 Loksatta Party is proud to announce that our intervention on the Telangana bill with key leaders in the Parliament is singularly responsible for securing and protecting the economic future of the new state of Andhra Pradesh and the new state of Telengana.

What has been finally announced in part or whole measure is fully attributable to the seminal T-Bill amendments forwarded by Loksatta Party on January 18th, 2014 on the floor of the undivided AP Assembly.

No other party can remotely stake claim to this comprehensive solution on all fronts, accounting for constitutional provisions, pervading economic, natural and infrastructure conditions and human development indicators.

Furthermore, we have yet again established what a party with vision and genuine care for its citizens can deliver for the country.

At a time when all other political parties were uniformly spouting crass regional and divisive mantras and were exclusively focused on their vote banks, with an insolent disregard for the Telugu people, LSP were the only party with a solution that secured a firm and committed economic roadmap for every single region in the new Andhra Pradesh and Telangana states.

What's more, Loksatta Party took its influence to Delhi to ensure that the bill adopted 9 salient features from its proposal.

Loksatta alone brought to light the biggest economic issue. The revenue deficit in the new AP places it in the red from day 1, putting even salary payments at risk. As per our proposal, which the centre has now followed to the hilt, the new state of AP will be compensated for 10 years with no budgetary problems. This is a significant accomplishment.

1. Revenue deficit in the new state of AP to be compensated for 10 years. Neutralizes budgetary problems, commitment secured. An LSP win for AP!

2. Tax exemption for the new AP for 20 years from excise duty and corporate tax, and other incentives. While the centre's verbiage still lacks clarity, the idea is on the table due to LSP. We will make it categorical shortly. An LSP win for AP!

3. Special category region status to all of the new Andhra Pradesh, including Rayalaseema and North Coastal Andhra. Central grants and Planning Commission devolved funds. High percentage and favorable terms. An original LSP idea from seed to fruition. Centre has offered 5 years, LSP will extend it to 10. An LSP win for AP!

4. Ensure Polavaram irrigation project in the new AP. Submerged regions to be made part of AP. Rehabilitation is no longer an issue. An LSP win for AP!

5. Many surplus water dependent projects in Rayalaseema and Telengana provided for by our amendments. Now enshrined by the Centre. Neither state can impede the others' development. This prevents future water battles. An LSP win for AP and Telengana!

6. GoI investments for infrastructure and educational institutions in the new AP secured and committed by the Centre due to LSP proposal. An LSP win for AP!

7. Provisions for securing law and order of Hyderabad included. An as-needed amendment has been assured.

8. A 4000 MW Power Plant in Telengana sanctioned and committed solely due to LSP effort. An LSP win for Telengana!

9. Central commitment for road networks in backward areas of Telengana has been secured. An LSP win for Telengana!

While we condemn the grotesque manner in which the T-bill was handled by the Congress, we do thank the BJP for being LSP spokespeople in the Parliament and advocating the valuable improvements proposed by LSP that not only avert stillborn status for the new states but actually bootstraps them into a development path. LSP will continue stay vigilant and monitor this closely to ensure that the changes adopted are actually brought to bear as there's many a slip between the cup and the lip. We will not tolerate backtracking.

The Telugu people have been cheated, swindled and betrayed in equal measure by YSRCP and TDP. Why were these two silent on the amendments? Why didn't they engage in constructive debate for a better state division on the floor of the state Assembly? Where was their concern for the people when the bill was sent to the Legislature explicitly for suggestions and improvements? Are their abilities to devise solutions decrepit? They have demonstrated their callous and selfish political nature by simultaneously shouting on the streets for their votes while remaining silent on development issues for the people.