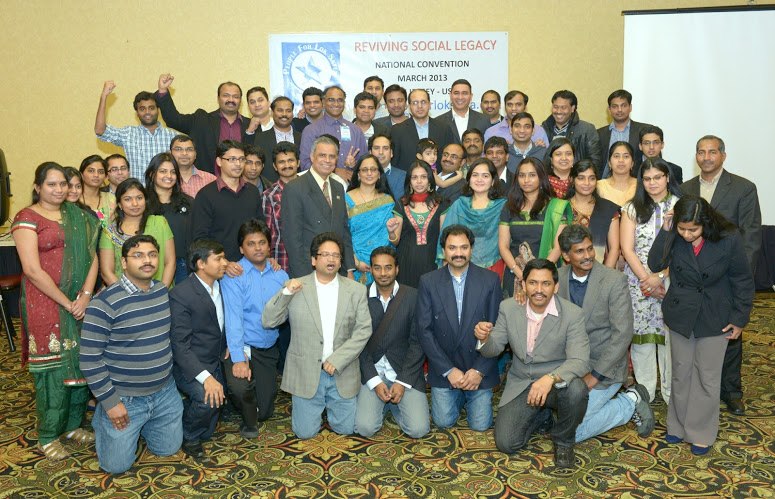 On the first day, Dinesh Pagadala and Sreekanth Kocharlakota presented a video to showcase the three successful activities undertaken by PFL in first two years - Rejuvenate India, NRI absentee voting rights and 240 mile Dandi-March-2 walk, that make all NRIs proud. They also presented on how to utilize social media for social change and strategies on how to improve the skills it is lacking.

Morning session of the second day convention include induction of new E-board with Rajani Karuturi as President by election commissioner Sarvani Piratla and appreciation of PFL volunteers by Prasanna Meda, sitting president and Jawahar Kambhampati, sitting vice president of projects. Awards are given to all PFL members who put efforts in last two years in various constituency projects and PFL infrastructure. Everybody expressed their wish to continue their efforts.

Sundeep Pattem organized presentation and discussion series about constituency promotion project (cpp) for four constituencies in last two years. Prakash Kapila and his team explained about victories achieved in Vizag and Rayadurgam. Sravanth Yalamanchili explained the work undertaken by Dilip Shankar Reddy in Malkajgiri and Pradeep Chukkapalli explained the activities done by Hyma Sagi in Sanath Nagar. Attendees came forward to support the four constituencies and most of them promised to stand by PFL alumni Hyma and Dilip. Manasa Mahati, Srinivas Gullapalli and Sreekanth presented fundraising strategies for LSP.
Youth leadership summit was held under leadership of Ravindra Nandam on “Current youth role in politics”, and all PFL members under 35 discussed that barring few youth playing a crucial role for most part they are disinterested in politics or blindly following prey to the caste politics. They concluded that it is a great menace to india and took oath against the caste politics. Krishna burugupalli mentioned that Lok Satta is the only party which gives real importance to youth. Bramhani boppudi, Ph.D. student, said that she got inspired from PFL alumni Hyma Sagi and Padma Bhupatiraju and will be moving to India to work for Lok satta.

A Standing ovation was given by members to past president ,founder member of PFL Prasanna meda,Dandi march-2 Architect Jawahar Kambhampati and Raghava Solipuram,one another member in building the organisation.