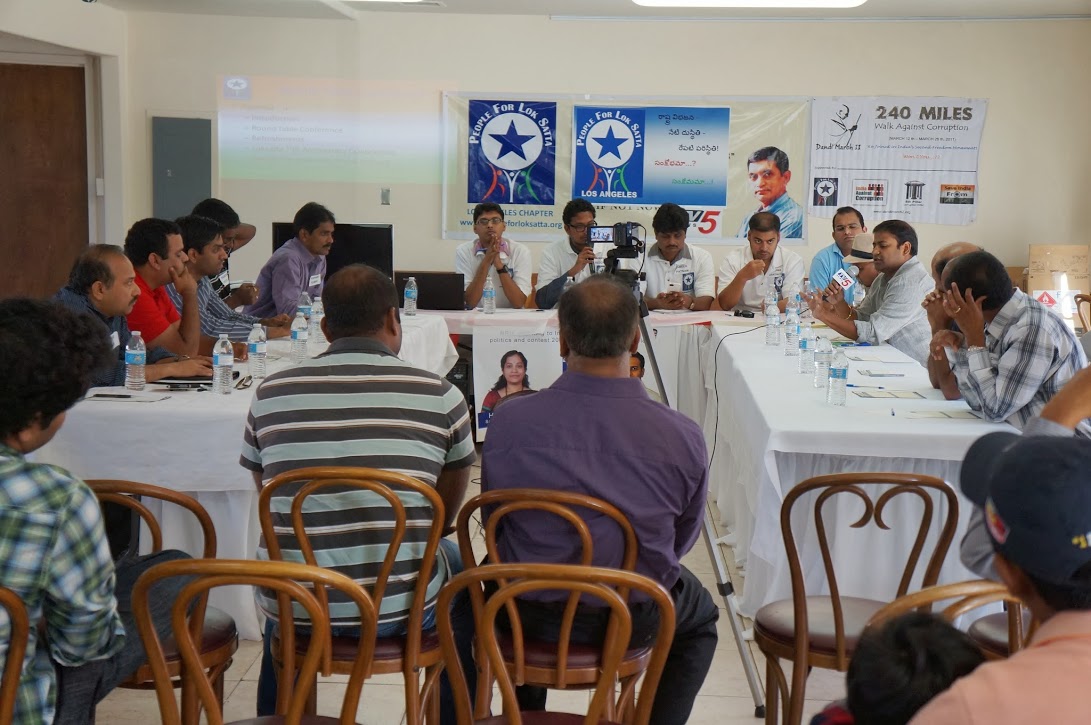 People for Lok Satta (PFL) So far Successfully completed RT Conferences in Dallas ,Bay Area,Chicago and LA Chapter. The purpose of fresh round of conferences is

to provide platform to emphasise the importance of the unity of the Telugu people.

Sripal Reddy, regional president of PFL, explained about their past activities like NRI voting rights and Dandi March II and told that he has same democratic intent to bring all NRIs together on this new issue. The panelists doubted the conviction of Central government to build new capital and cited the instances of the recently divided states. Speakers like Sreekanth Komatireddy expressed the need of the common capital while the new capital is built, while others like Prasad Rani felt that coastal people may not see Hyderabad as their capital the way the Telangana people do because of geographical disadvantage.

Ramesh Kotamurthy and Pradad Papudesi are nostalgic about Rayalaseema and explained the concerns from their region on water, education and jobs. The panelists felt that the study done by Sri Krishna Committee as the best source to use when the state resources are distributed during bifurcation. Panelists also discussed on how to avoid problems in future. Ashwini Kumar Metuku, another panelist reminded past mistakes and violations of agreements during separation from Madras and also forming united state. Nandan Potluri cautioned about uncompleted projects like Pranahita-Chevalla. Vijay Bhaskar Nekkanti expressed the need for good people to join politics. Chandra Nangineni expressed that decentralization and distribution of development across all regions in both the states as the right solution. PFL Thanked LA Chapter TV5 Reporter Satish Pasupuleti for support.

PFL also celebrated 7th anniversary of Lok Satta with cake-cutting on the occasion. Several community leaders like NRI Samay Radio editor Srihari Atluri, Praveena, Vijay Kasanagottu,Jawahar Kambhampati, Veera Babu, Raja Aysola, Sreekanth Kocharlakota and Varma Dantuluri attended the event. In the closing remarks, Ramana Mokilla and Ameer Pattem of PFL expressed the hope that all the issues will be addressed in an amicable manner and Telugu people will soon progress towards a better tomorrow.

Media Links
LA PFL Round Table Conference Pics (Picasa)
What we should understand before we talk about State Division or United AP? – By Loksatta Party