As you all Know that Loksatta Has been fighting for the CCTV Security in Hyderabad after Dilsukhnagar bomblasts for City and Women Security.

You all know that PFL has been playing a crucial role in this event and Few of our PFL members contributed donation in the form of ideas and money and below is the update.

Total amount contributed was 2 Lakhs 29 Thousand. And he amount spend was first time we advertised in the Radio and it was not as much expected ,as we intially assumed as most people in hyderabad listen radio in cell phones will immediately give missed call but came to know that it went to mass people like saloon people,auto drivers who frequently listen radio which was a good sign.Atleast most people came to know that Loksatta is fighting on this.

Radio ad Voice given by some commericial voice owner which was not effective for political ad and we thought Hyma voice would be apt and finally it came well than the Intial voice over ,you can listen to attachments ,Radio was telecatsed for 30 days daily 8 times.

And the amount for all above was 1,53.000.which was dircetly paid thru party

And Other than that Ramu garu got written on Various spots on walls on city outskirts as people leaving for sankranti will be back and it was around 5000 Rs and as shown in attachment 200 Autos has banners and cost for that was 10,000 Rs .and miscellinous expense was around 4000.

As Prasad garu from accounts department who served LSP for many years left recently from party Autos and wall writing amount wa spent by Ramu garu and need to get clearence as soon as somebody take in charge and we will work with Rajanigaru on this.

And regarding rest of amount we will discuss with donors to use on Next steps.

Govt promised 3 times and stepped back on CCTV's so LSP hyderabad will be including this in manifesto and will continue its fight till we get CCTV's for security and No doubt all people including media now recognized the efforts of Loksatta and tomorrow if they see CCTV they will remember Loksatta.

It is one of the Good campaign which was suggested by PFL to utilized for events and so far we got 18000 Missed calls and as per their observation ads on auto are some good source for this calls.

LSP will decide to further usage of this calls and continuation.

In thi purpose PFL should Pat itself for proposing and acting as main source BEHIND this event ,and special thanks to Pradeep Chukkalapalli ,Event VP who not only donated generous amount of 1,50,000. but also one among who proposed this event.

And It was greatky Driven by Hyderabad Loksatta president Ramu dospaty effectively and got special appreciation from police deparment and support from them as they feel that is needed mandatorly and helpful for them too.

All Hyderabad leaders Hyma,KGR,Sambi reddy etc were actively participated in this.

No doubt all volunteers,donors participated for this will be seeing Security cameras in coming years and you all are part of it. 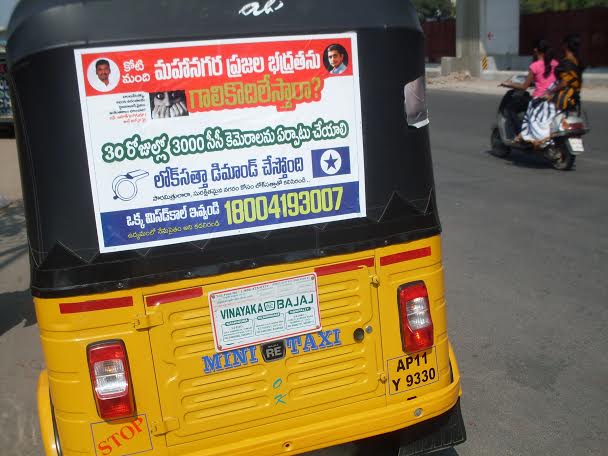 Health: Lok Satta​'s advocacy and grassroots work (1997 onwards) for improved public health delivery system has led to formation of the National Health Mission (in 2005; with a budget of Rs. 1000 billion) that would lead to a decentralized, universal healthcare access in the country.

Urban Health Survey (in 2005) was conducted by Lok Satta volunteers under the direction of a team of medical experts, to document the functioning of Urban Health Posts in Hyderabad. The findings of this study contributed towards the preparation of a blue print for the National Health Mission (above). The primary units of Lok Satta too have taken up grassroots campaign (since 2000) across the state of AP, to document the functioning of primary health centers.

In 2005, Lok Satta has collaborated with a like-minded civil society organization ('PRATHAM') to conduct a massive Annual Status of Education Report (ASER 2005) in AP as a part of the national effort to evaluate the status of education and related infrastructure. This survey will be carried out in December 2005 covering around 450 villages of the AP state.

Power Sector: Lok Satta formed a Consumer Organization for Regulation of Electricity (CORE) team in 1998 that has successfully demonstrated the model of decentralized distribution management of electricity as an important component of power sector reforms in the country (on going project).

Lok Satta​'s advocacy campaign for establishment of Local Courts (1997 onwards) with simple procedures has led the Indian Government to announce the tabling of a bill in the Winter Session of 2005, to this effect. Once established, such courts would greatly serve the purpose of delivering speedy, effective and affordable justice.

In collaboration with Cooperative Development Foundation (CDF), Lok Satta helped stop the enactment of a restrictive Societies Law (in 2004) and ensured passing of an enabling law benefiting 65,000 organizations across the state. These efforts have also prompted the Union Government to draft a constitutional amendment (due to be enacted soon) towards ensuring the free functioning of the cooperatives.

Lok Satta, in collaboration with like-minded civil society organizations has taken up the campaign to empower the women representatives in local governments (since 2004).Empowerment of Women 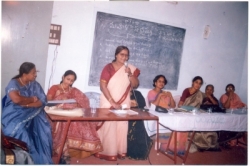 Lok Satta has catalyzed the federation of elected women politicians in AP (in 2005), as a part of the South India-wide effort to form similar federations. These federations are acting as valuable platforms for women representatives to enhance their leverage and thereby bring a greater focus on women's issues into the governance process.