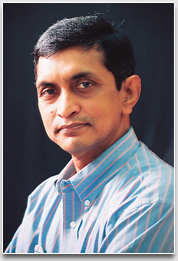 Dr. Jayaprakash Narayan is a physician by training who went into the Indian Administrative Service in the aftermath of the Emergency and failure of the Janata Experiment. He was a topper in the IAS exam. During the 16 years of distinguished public service in various capacities, he acquired a formidable reputation in the State of Andhra Pradesh.

Some of his major accomplishments while in government

His other accomplishments include several major policy initiatives, including

In spite of an impressive personal achievement, Dr Narayan's experience in government convinced him that faulty governance process was the biggest hurdle to India and Indians achieving greater success. And what India needs today is a fundamental change in the rules of the game and not a periodic change of players.

In order to translate his vision into practical reality, he resigned from Service (IAS) in 1996, and worked with like-minded colleagues for the formation of Lok Satta and is currently its National Coordinator. Lok Satta has now emerged as India is leading civil society initiative for governance reforms. It has wide reach, name recognition, credibility and passive support of about 20% of the population of Andhra Pradesh. Lok Satta is now building alliances across India. State-level initiatives are encouraged based on Lok Satta's experience. These initiatives in a few major states will then build a common platform for national effort for governance reform. Lok Satta is primarily focusing on Maharashtra, West Bengal, Tamil Nadu, Karnataka, Orissa and Gujarat in this quest for building a national platform.

Dr. Narayan has been felicitated with several laurels.

Dr Jayaprakash Narayan has served on the following panels

In 2006, he initiated the launch of Lok Satta Party a movement for new political culture in the state of Andhra Pradesh and is serving as its President.